On 29 November 2016, Greg Clark, Secretary of State for Business, Energy and Industrial Strategy, Greg Clark, made a statement on corporate governance, in the House of Commons.

On the same day, the UK Government issued a Green Paper on some reforms that will have an impact on the payroll and reward professions.

What is Corporate Governance?

Corporate governance is the methodology by which companies act, are directed and are controlled.

One of the major pieces of legislation that controls this is the Companies Act 2006 which sets the legal framework for how some companies are formed and administered.

On 29 August 2017, the UK Government responded to the feedback from the 2016 Green Paper.  It outlined a package of 9 corporate reforms, not all of which require legislation.  These are:

Fast Forward to the 2018 Regulations

On 10 June 2018, the UK Government announced the imminent publication of the Regulations that make up their package of reforms.  The headline announcement for payroll and reward professionals is that UK listed companies with more than 250 UK employees will have to publish figures that will show the gap between the Chief Executive’s salary compared to that of their average worker.  In addition to publishing this information, the employer will have to justify this difference.

The payroll, HR and reward professions welcome the terminology ‘pay ratio’ to their workloads, publication of which is all designed to improve transparency and accountability.  Employers will want to look at The Companies (Miscellaneous Reporting) Regulations 2018and note that they are due to come into effect in January 2019 with the first reporting in 2020.  They are written under the ‘draft affirmative procedure’ meaning that they have to be debated in both of the Houses of Parliament.  They are currently in the House of Commons.

What do they say?

Taken from the FAQ document to help employers prepare for the new Regulations, here is my table of the companies impacted and how they will be affected: 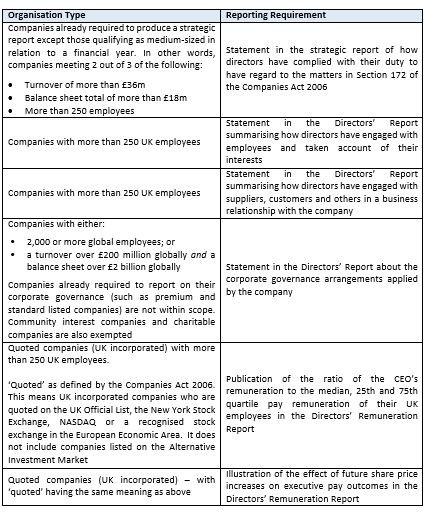 This affects payroll how?

Introducing the pay ratio terminology into the payroll lexicon, employers will expect payroll systems to be able to produce some of this information for them.  The calculation has some similarities with Gender Pay Gap Reporting but there are new calculations as well.

The good news is that:

Let’s keep an eye out for this one and the progression of the Regulations.  Also, let’s hope that there is some clear guidance for employers and software developers.