Section 34 of the Employment Relations Act 1999 provides for changes to employment law payments and awards in Great Britain under two Acts...

Section 34 of the 1999 Act provides for an increase or decrease in the following statutory limits each year according to the year-on-year change in the Retail Price Index (RPI) at the previous September.

On 19 February 2018, the Department for Business, Energy and Industrial Strategy (BEIS) laid the Employment Rights (Increase of Limits) Order 2018 that reflects the increase in the RPI of 3.9% from September 2016 to September 2017.  These are effective from the ‘appropriate date’ of 06 April 2018 which reflects, in turn, the implementation date for these statutory changes as per the Enterprise and Regulatory Reform Act 2013.

This appropriate date is important and varies depending on the circumstances that give rise to the need for payment at the new rates (see regulation 4 of the above 2018 Order).  For example, in a redundancy situation, the new statutory minimum payment of £508.00 per week applies where the date of the redundancy is on or after 06 April 2018. 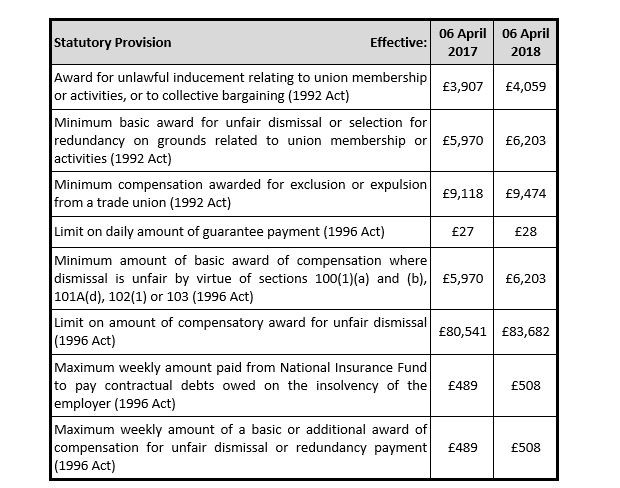