Not since 14 February 2016 has Northern Ireland amended certain employment law payments and awards via the Employment Rights (Increase of Limits) Order (Northern Ireland) 2016...

This has meant, for example, that the value of a week’s pay under the Employment Rights (Northern Ireland) Order 1996 has remained at £500 since this date, as there was no Increase of Limits Order in 2017 (though there was one in Great Britain).

The Employment Rights (Increase of Limits) (No. 2) Order (Northern Ireland) 2018 changes all of this and there are new rates from 06 April 2018.  How we got to the below rates is a complicated legislative route that I will endeavour to explain:

Under provisions in Article 33 of the Employment Relations (Northern Ireland) Order 1999, if the Retail Prices Index (RPI) for September of a year is higher (or lower) than the index for the previous September, the relevant Northern Irish department (the Department for the Economy) is required to pass legislation in the form of an Order.  The effect of this is to change the limits that apply to certain awards made by Industrial Tribunals, the Fair Employment Tribunal or as a result of arbitration by the Labour Relations Agency.  These are awarded under either:

The 1999 Order required an Order to be laid and amounts to change ‘as soon as practicable’.  Section 22 of the Employment (Northern Ireland) Act 2016 amended this wording, made changes to the rounding methodology and said that any changes would be effective 06 April.  This effective date is the same as the similar changes to payments and awards that apply in Great Britain.  However, Section 22 was never ‘commenced’, i.e. it was in the 2016 Act but laid dormant and meant that nobody had to act on the provisions.

In 2017, no Limits Order was actioned.  I suppose that this is because it was not ‘practicable’.  The fact remains that Article 33 of the Employment Relations (Northern Ireland) Order 1999 still applied and there was a requirement to consider revaluing the limits and awards in line with the RPI changes from September 2015 to September 2016.  So, this leads to the recent complicated chain of recent legislative events:

Simply, 2017 did not happen in terms of increases to rates that are paid by employers / due to employees if awarded.  However, the rates that apply on or after 06 April 2018 have been incremented to take into account RPI inflation increases over 2 years.  I hope that makes sense and apologies for the explanation.  However, it is no use telling you the revised rates for 2018/19 and pointing to the No. 2 Order (as you will only ask what happened to No. 1).

The following are the revised increases that apply where the event giving rise to the compensation entitlement occurs on or after 06 April 2018 courtesy of The Employment Rights (Increase of Limits) (No. 2) Order (Northern Ireland) 2018 above. These are shown below in red compared to the values that applied the last time an Order was placed (that resulted in values that we had to consider) and the fictional ones in the No. 1 Order. 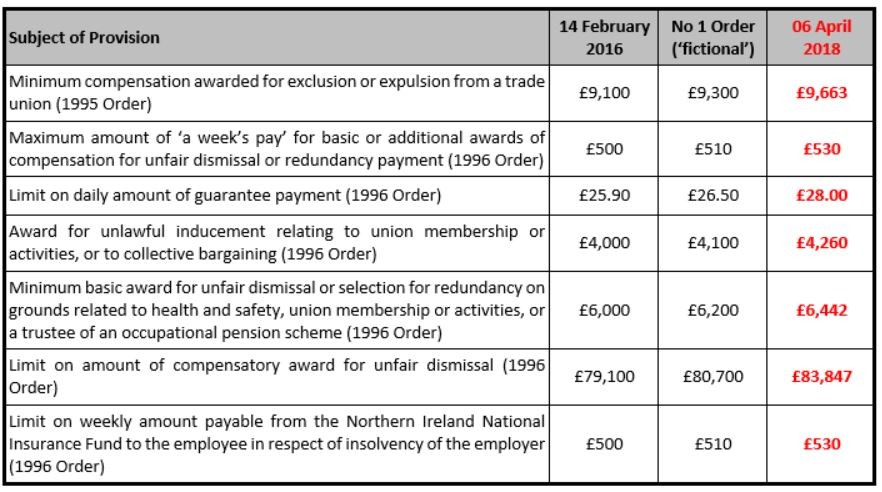