On 16 October 2019, the Office for National Statistics (ONS) announced the Consumer Prices Index (CPI) figure for the year to September 2019 as 1.7%, unchanged from August 2019.

This is represented by the yellow line. 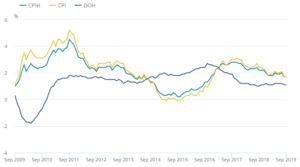 September’s CPI index is always important from a professional point of view – complicated, fascinating and significant:

There are important values that must increase by at least the value of CPI at the September preceding the start of the tax year, i.e. the 1.7%.  This is courtesy of a provisions in the Income Tax Act 2007:

The 1.7% value in September 2019 does not really allow us to predict these values at all.  The Chancellor will do whatever he likes in the Budget, ‘planned’ for 06 November 2019.  This depends on Government policy at the time and how much they can afford.

What we do know, however, is that the above values must increase by at least 1.7%.

For tax year 2020/21, Finance Act 2019 disapplied the ‘indexation of allowances’ part of Income Tax Act 2007 in respect of the Income Tax Basic rate limit (for rest of the UK Taxpayers and Welsh Taxpayers) and the UK-wide Personal Allowance.  This is because the limit and the Allowance were set at values for 2019/20 and 2020/21 as follows:

Government policy at the time was to resume indexation in line with CPI inflation from 2021/22 onwards and legislation reflects that policy.

As we come towards a ‘planned’ Budget 2019 in November, the question is whether this Government’s policy remains that there will be no changes to the above thresholds.  During the Conservative Party leadership election, now Prime Minister Boris Johnson indicated his intention to raise the threshold at which UK Taxpayers and Welsh Taxpayers start paying tax at 40% from £50,000 (i.e. £37,500 + £12,500) to £80,000.

Budget 2011 announced that the basis for the indexation of the following would be in accordance with September’s CPI to determine:

* Autumn Statement 2016 announced the alignment of the Primary and Secondary Threshold.  This means that for 2019/20, both will be incremented by the rate of CPI as at September 2019 (i.e. the September preceding the start of the tax year).

The above will all be confirmed by the Chancellor in a Budget and ‘Amendment Regulations’ will update the Social Security (Contributions) Regulations 2001.

The CPI indexation rate will also be used to increment payments such as Statutory Sick Pay, Statutory Maternity Pay etc.

As I discussed in my article ‘The Triple Lock’ on 01 October 2019, the question, therefore, is ‘what is earnings inflation’?  To replicate some of the article, there is no statutory definition of earnings inflation, just that the Secretary of State ‘shall estimate the general level of earnings in such manner as he sees fit’.  By convention, the Government has compared the Nominal Average Weekly Earnings (AWE) from the ONS for the 3 months to July in one year and compared it to the following year (i.e. May to July 2018 compared to May to July 2019).  The ONS indicated that there had been a rise of 4% in this period.

So, simply, the Triple Lock guarantee means that the bSP and nSP will increase in 2020 by the higher of:

Of course, the bSP is incremented by the Additional State Pension (ASP) which does not apply to the nSP.  The ASP is not incremented in line with the Triple Lock and will be increased by the value of CPI inflation as at September 2019 (1.7%).

The Finance Act 2016 made a provision for the Lifetime Allowance (LTA), to increase by the value of CPI from tax year 2018/19 onwards.

Of course, this will also be confirmed by the Chancellor in a Budget.

When you look at it, September 2019’s inflation rate really does matter.