31 July is another annual deadline that some employers are going to have to add into their calendars. The Trade Union and Labour Relations (Consolidation) Act 1992 (TULRCA) was amended by the Trade Union Act 2016 in a number of areas that impact employers.

One of these was the reporting and publication of facility time in public sector employments with the chance that this could be restricted in years to come.  The first reporting deadline is nearly upon affected employers.

What is facility time?

Facility time is a statutory right to paid time off conferred by the Employment Rights Act 1996 (and Order 1996 in Northern Ireland).  This legislation refers to trade union legislation where it is also enshrined.

The right to ‘reasonable’ paid time off is for union representatives to carry out duties that are relevant to their role, for example negotiating terms and conditions, assisting and discussing issues with union members and to undertake training.  The role of a trade union representative is wide and so are the definitions of what constitutes facility time.  Further, the 2017 Regulations (below) cover both paid and unpaid time off.

Perhaps the best source of guidance is that produced by the Arbitration Conciliation and Advisory Service (ACAS) on their Website.

What is the legislation?

Section 172A of the 1992 Act was inserted by the Trade Union Act 2016 and details that ‘relevant public sector employers’ will be required to annually publish information in relation to facility time usage and expenditure.  The Trade Union (Facility Time Publication Requirements) Regulations 2017 effective 01 April 2017:

Section 172B was also inserted by the 2016 Act and allows for the restriction of facility time after a period of three years starting 01 April 2017 ‘having regard to a range of factors’, for example if the spend is considered unjustifiable or excessive.  When the 2016 Act was being debated in the House of Lords, Ministers indicated that they would wait for three years’ worth of reporting data before imposing any caps.

Good supporting guidance has been produced on Gov.UK regarding the publication requirements, as per that imposed by the 2017 Regulations.  The below is a summary only:

The Regulations and reporting only apply to employers that have at least one trade union representative and have more than 49 full time equivalent (FTE) employees during any 7 of a 12 month relevant period.

The data must be published by 31 July 2018 and to the same timeframes every year thereafter.  As well as displaying on their own Website, organisations are also required to publish this data on the Central Publication Service Website on Gov.UK.

A glossary for deciphering the above: 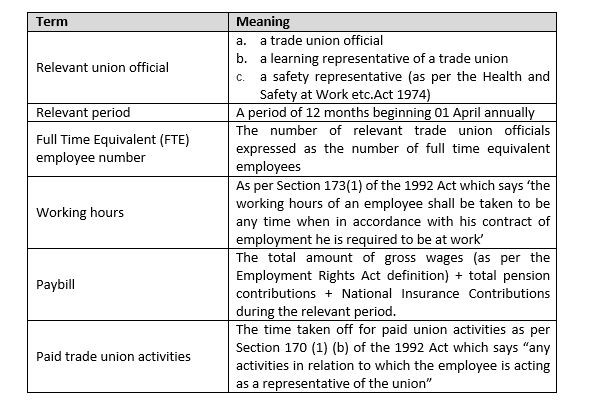 Always consider the legislation together with any devolution impacts.  Firstly, there are no Northern Ireland consideration.  TULRCA does not apply, and trade union membership and activity is a devolved responsibility.  We are only looking at Great Britain:

So who is affected?

In the first instance, we are not looking at devolved Welsh authorities.  However, we are looking at Regulation 7 which specifies that a relevant public sector employer is as per the definition in TULRCA:

An employer is a relevant public sector employer if the employer:

a) Is a public authority specified, or of a description specified, in the regulations, and

b) Has at least one employee who is a relevant union official.

Schedule 1 of the 2017 Regulations is the place to go for a full list of employers that will be affected by these reporting and publication obligations.

There is no doubt that the reporting obligations are potentially burdensome for employers – on an on-going basis.  The employer will have to differentiate between statutory facility time and paid time for union activities.  Then there is the calculation of the paybill and the resultant hourly cost calculations.

The above guidance on page 8 details the data collection requirements in the relevant period.  However, I would suggest that this is more than a once annual collection exercise:

For information, there is an example report that employers might find helpful on the Scottish Fire and Rescue Service Website.  This is housed under their 05 December 2017 Staff Governance Committee meeting papers under ‘Working Together Framework’.  Although this is a draft six-monthly report for the period 01 April to 30 September 2017, it does give an idea of the reporting requirements.